Kerrie Warren (born 1968) is an Australian artist who employs the action painting techniques of abstract expressionism in the creation of large scale works that explore humanity’s relationship with nature.

Although born in Melbourne, Warren’s family relocated regularly, so her childhood memories are a collage of loosely linked impressions that crisscross the landscapes of Australia’s south and south east: memories suffused with an atmosphere of transience.

During these years, Warren became aware of emotions and sensations evoked through the lyrical configuration of words.  She was captivated by the mere sight of poetic sentiments upon a page, so from a young age she began reading and writing poetry.

Drawing and painting were also emotionally rewarding activities, and gradually, in the way synesthetes encounter correspondences, Warren detected corresponding undulations in music, painting, sculpture and other forms of art.  Across mediums she sensed an inherent ‘liveliness’.

Years later, still intrigued by this creative ‘liveliness’, Warren enrolled in a Diploma of Art in Ceramics, a discipline that now represents an ideal counterbalance to her heroic and widely celebrated achievements in the field of painting.

It was in fact a result of this tactile and grounded discipline that Warren discovered a mode of expression that for her embodied the essence of so many disparate mediums.  As Warren recalls:

I came to abstract expressionism and action painting while completing a Diploma of Art in Ceramics.  The discovery occurred through the enjoyment of dripping and pouring glazes freely onto dry ceramic surfaces for varying effects.

The discovery precipitated a dramatic change in direction, as the concrete, the physical, the scientifically measurable, gave way to more personally challenging interior modes of perception, modes that may well be detectable through consciousness alone.  Richard Pousette-Dart, the founder of the New York School of painting, described the end point of this tendency most concisely:

I am an artist of the concealed power of the spirit, not the brute physical form.

A Diploma of Transpersonal Art Therapy followed, which further developed Warren’s creative philosophy in this direction.  Meanwhile, her acts of expression were expanding.  They now occurred through dripping and pouring increasing quantities of paint in successive gestures across ever larger expanses of hand-stretched canvas.  The picture plane yawned wide as did the arena of engagement.  What emerged were works with the unmistakable impression of the whole artist.

The process was intuitive, immediate, grounded in the here and now, and yet within the visual momentum, within the dance of energy, within interweaving elements, a sense of silence and an experience of transcendent pause was evoked.  As Maureen Flynn observed in her review of Warren’s 2009 New York exhibition:

it is the patterns that she finds within the chaos that enables the viewer, with the slightest perceptual shift of vision, to arrest the movement that she generates with her vigorous swirling strokes and discover the serene stillness at the heart of her compositions.

To further her understanding of these most tactile and visually poetic of explorations, and to come closer to the paradox that Flynn correctly identified, Warren completed a Master of Contemporary Art at the VCA whilst further developing her studios where her art and the natural environment could flourish side by side.

This living connection to the land has inevitably left its mark, both on the artwork created and on Warren’s evolving philosophy.  For Warren, the natural environment, with its unpretentious and ever-changing sense of liveliness, is a constant self-renewing source of inspiration.

The action painting that was central to the Abstract Expressionist’s is certainly at the heart of Warren’s energetic landscape works, which, much like Nature herself, are in constant visual flux.  As Warren recently revealed:

It has become clear to me that I have an insatiable curiosity for how life works… I find the palpable rhythm of nature intoxicating… [I therefore] strive to interrupt a cohesive Gestalt and trigger the visualisation of a living, moving environment.

Warren’s living moving environments, whether in gestural paintings, ceramics or sculptural installations, show signs of nature’s ongoing cyclic influences working in concert with the layered forces of the artist’s consciousness.  A labour of decades has enabled this rewarding synthesis that has left its trace throughout Warren’s evolving body of work.

Viewers are rewarded with a vision of sublime serenity united to the whirling limbs of a material world in motion, a marriage that opens up innumerable explorations.  Warren’s own reward also involves ongoing exploration into a reality conceived in a place where nature’s cycles and an ever-expanding consciousness can meet.  As Warren confided:

I often find myself literally walking through landscape – inside a painting.

In Crossover, West Gippsland, Warren enjoys the life of a creative recluse.  She has nonetheless exhibited in Guangzhou and Jiujiang in China, in New York and Singapore, and along Australia’s  Eastern Coast, while her works feature in public and private collections here and abroad. 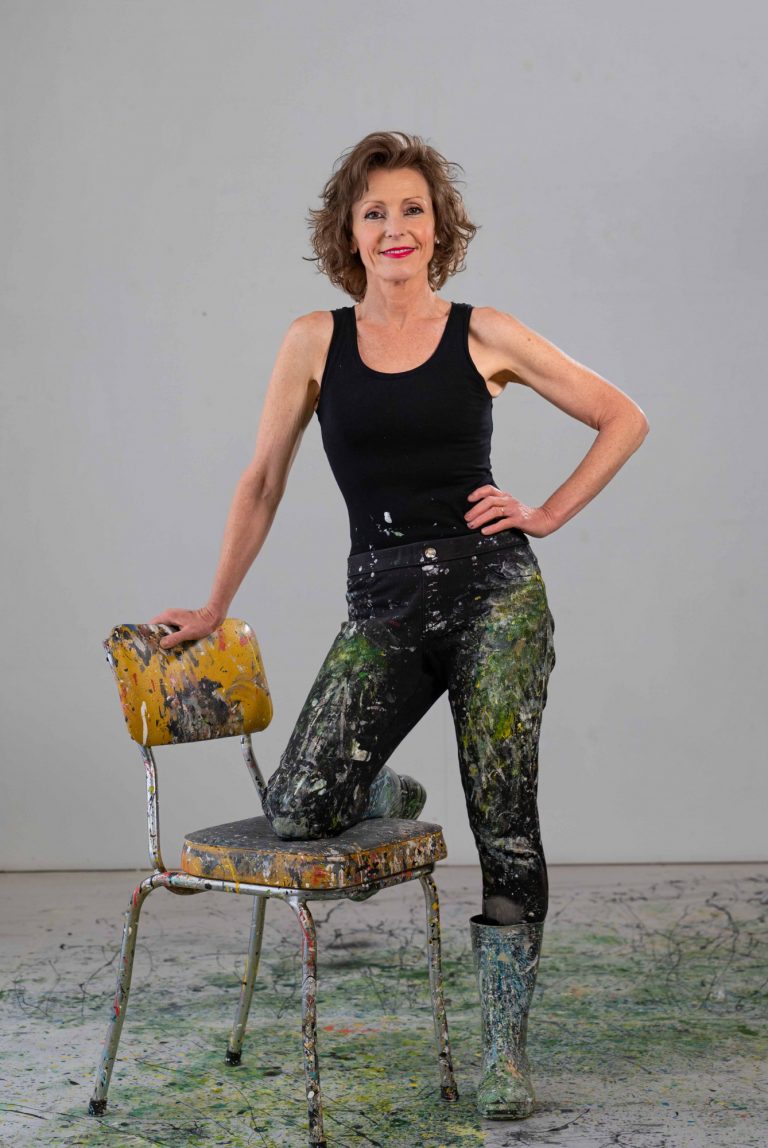 The Artist Kerrie Warren in her Studio, November 2021 – Image by Darryl Whitaker

“I came to find Abstract Expressionism and Action Painting many years ago whilst completing a Diploma of Art in Ceramics. I enjoyed dripping and pouring glazes freely onto the dry surface for varying effects.

I took this a step further during a Diploma of Transpersonal Art Therapy where I used similar techniques to express and impress myself upon the canvas.”

It wasn’t until others made reference to ‘Jackson Pollock’ that I became more aware of his work and the synergy between our processes. Whilst exhibiting in New York in 2009, I took the opportunity to view Pollock’s work first hand at MoMA, the Museum of Modern Art.

I took a coach to the Pollock-Krasner House and Study Center at Long Island and walked across the paint spattered floorboards of Pollock’s studio… a deeply profound experience.”