After attaining a diploma in Transpersonal Art Therapy, with the idea that it would provide her with a means of support while following her true path as a painter, Warren eventually discovered that she had been drawn to painting primarily “for my own healing and evolvement as a person, as an artist.”

Thus she now paints full-time in her rural studio in Crossover, Victoria, approximately an hour from the capital city of Melbourne.  Yet, ironically, it would appear that the curative aspect of her work may still be more contagiously extensive than she thinks, given the serenity that radiates out from her paintings when one encounters them in a gallery context.

“My reference points are internal, my influences are environmental and I feel a deep connection with nature and the energy of life,” Warren states; all of which may account in part for the meditative feeling of peaceful calm that her work promotes in the viewer.

But in purely painterly terms, her technique also has a great deal to do with it.

Unlike many Australian artists who look closer to home for artistic models, attempting to emulate well known Australian modern painters such as Sidney Nolan or Brett Whitely, Warren was drawn to Abstract Expressionism.  Of the artists in that American movement, she is closest in both spirit and technique to those who work in an ‘overall’ mode of composition such as Milton Resnick, and, especially, Richard Pousette-Dart, who once stated, “I am an artist of the spirit, not of the brute physical form.”

The same might be said of Warren, whose thickly encrusted surfaces seem to undergo a magical metamorphosis from the material to the ethereal and emit actual light.  A strong sense of movement also comes into play in her large acrylics on canvas.

The vital new field of quantum physics provides Warren with some of her inspiration.  In an artist’s statement she speaks of ‘the tracking and marking of energy,” as well as “finding patterns within chaos” that enables the viewer, with the slightest perceptual shift of vision, to arrest the movement that she generates with her vigorous swirling strokes and discover the serene stillness at the heart of her compositions.  And this duality of effect, manifesting in the constant perceptual shifts that occur as one contemplates her paintings for prolonged periods of time, is what distinguishes Warren’s work significantly from that of Abstract Expressionist predecessors like Jackson Pollock and Willem de Kooning.

For Kerrie Warren appears to have evolved the capacity, through the layering of intricate tiny strokes of mainly pure primary hues that ultimately seem to meld into a single energy field, to simultaneously animate and stabilize all activity on the picture plane, and finally apprehend the calm stillness at the center of the painterly storm. 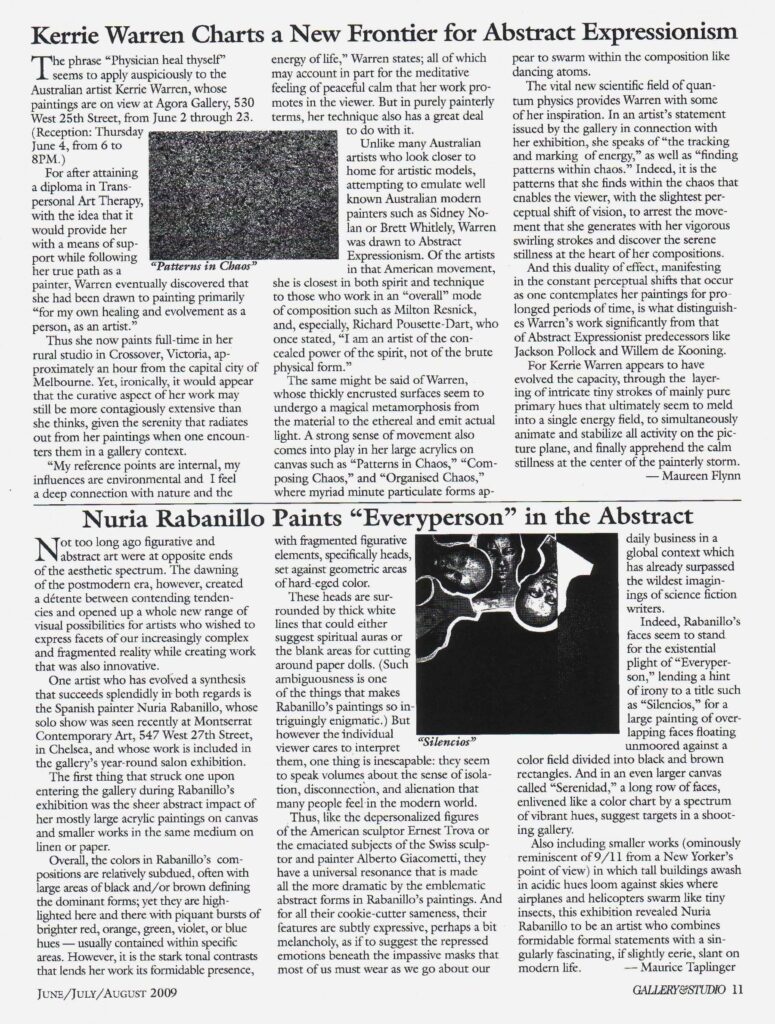